I have no idea and can't get through any of them.

I just came back from Calverton National Cemetery to visit my Buddy Tommy who died of Covid and is buried there. 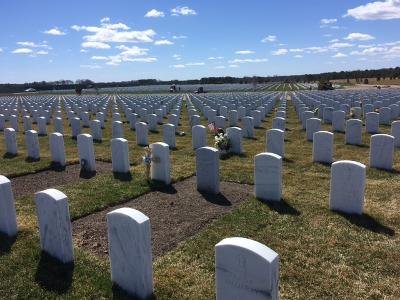 NJRC Member
I really don't know what so many people are spending so much money on. It boggles my mind as so many people keep saying this is such an expensive hobby. It could be, just like playing golf, especially if you want to play in Hawaii every week and you live in Ohio.

I can see you need to buy all the stuff, a tank, some lights, rocks etc. But after you do that, all you need is some electricity, food, some water and additives.

For decades I used "Instant Ocean" I don't know what it cost but I didn't change water every hour and a half like so many people do. I used to buy that salt and I think it was enough to make 50 gallons and maybe it was $25.00 or something like that.

In my 100 gallon tank I changed about 20 gallons every 3 or 4 months so that $25.00 of salt lasted me 5 or 6 months.
That is not even a half a tank of gas, a dinner for one in a cheap restaurant or a fake eyelash for a Supermodel for a year.

I used to get driveway ice melter and draw a beautiful picture of a Moorish Idol on the box to make myself feel better that the stuff is basically free.

Now I buy the 2 part stuff because I am to lazy to get ice melter and I don't want to buy fifty lbs of the stuff but even that is cheap. I have a 2 gallon bucket of both calcium and alk that I mix with water and I don't remember what it cost but I have been using that same bucket for probably 3 years.

I use some LRS food which is expensive but I also feed clams that I can get in a bait shop for practically free or I can get them in a supermarket. I eat clams all the time so when I buy clams for clam chowder, or linguine and clams, I buy a few extra clams as they are like 20 cents each.
I raise white worms which are also basically free and they eat stale bread and maybe 50 cents worth of yogurt a year.

I also don't get dosers. I have to stand next to the tank anyway to feed them so while I am standing there waiting for the food to defrost and I am going "Doot Da Do, Doot Da Do" I fill a small container with calcium or alk and dump it in. Eventually like in a couple of weeks I test it and then put in a little more or less. Trust me, the corals don't care if the alk is 7, 8 or 9. They also don't care if the temperature is 76, 78, 79, 80, 81 etc.

It's the same with salinity. I once went to Germany on one of those riverboat cruises. My tank sitter let the water level drop 7". Of course all the corals above the water died, but the rest of the corals sitting in water with so much salt in it that the Lord would have no trouble turning me into a pillar of salt like he did to Lotts wife when she turned around to fix the strap on her Prada high heel shoe.

These forums make us feel like we need an abacus or the Hubble telescope to measure our parameters. We are not building space shuttles or those little things on the end of our shoelaces. (aglets)

Yes, we want our parameters close to some measurement but we don't have to go nuts.

Livestock is also cheap if you know how to keep it alive. If you need medications, quarantine and all that, it could be expensive and if you need that, you are doing it wrong.

I have this bottle of copper and formalin since the 70s and it is still almost full. I only keep it for nostalgia as it was made in Brooklyn like I was.

My fireclown is about 30 years old. He was probably $15.00 so he cost me 50 cents a year. Corals also. You buy them and corals are immortal like Thor. I also can't keep them forever but I can get at least 5 or 6 years out of them, some I have for much longer and most of them I have no idea how old they are. They grow and fill the tank so why are we constantly buying new corals. What are we doing? Eating them?

If you keep losing fish, do the oceans a favor and get a new hobby. There are many interesting hobbies around, my other hobby is collecting those little packets in electronics that say "Do Not Eat" and think up recipe's with them.
Last edited: Apr 1, 2021
M

NJRC Member
I guess it depends really. I have a cheap build it didn't cost much. 29g tank was free on the side of the road. light nicrew 100w for $100. return pump is a $20 special from Petco. stand was $25 on Facebook used. rock and eggcrate was either free or nominal. bangaii cardinal was $20, lawnmower blenny was $35, naked cinnamon clowns were somewhere between 60 and 90$ don't remember their cost but one jumped out after a few days and had to buy a third. peppermint shrimp was $9. wavemaker was probably let's say $20. have another pump in there I run as a polisher that's another $20. I bought 3 submersible lights and have a makeshift refugium in one of the rear panels, those were probably around $40 including the $5 I paid for chaeto. around $75 for the clam. spent several hundred more on corals.

my big tank is a different story. way more money spent on that and not even half way closer to filling it with water.

mickeysreef <*))))< said:
naked cinnamon clowns were somewhere between 60 and 90$
Click to expand...

If you put some clothes on those clowns, you would have even less money.

NJRC Member
Paul
Whats your thoughts on this new killer "paly toxins"...
I dont ever remember reading of someones tank killing them in the 80's or 90's,I wonder if were making corals toxic with all the additives.

One of my Chinese lights croaked. This is the third one I replaced since I am living here for the last three years. I guess you can only get about two years out of these things.
Now I buy the cheapest ones for like a hundred bucks because no matter what they cost, they only last about two years even though LEDs are advertised to last like 100 years.

I am going to buy a spare because I know I will need another one soon.

It's 67 degrees here in NY now and If I get some ambition one of these days, I will go and collect some water. It's been a few months.
M

NJRC Member
hydra 32 is only about 350 new and will last more than 2 years. probably many people on here can comment on their longevity as i dont have them but they are a good bang for the buck in my study of purchasing lights. i dont know what chinese black boxes you are getting for $100, but i bought a nicrew 100w for 100, now they are more (i saw the 50w for 100). so i think probably the hydra 32 at 90w is probably equal or better than any chinese light at $100

ARKNOAH LED
I just ordered this one. It is the first one I saw that was in stock and I could get in a couple of days. I don't care what kind it is as they are more or less junk.
I should go back to building my own, but I don't have the time. I may have to go back to work so I can take a day off.
M

NJRC Member
eh. i like this one better. again no experience.

i also bought this one, but its sitting in the box a month or two

NJRC Member
This Saturday is a year since my best friend of 50 years died of Covid.
His wife just got permission to have a Veteran and Police service at Calverton National Cemetery near my house where he is buried which I found out is the largest Veteran Cemetery in the US. (I always thought it was Arlington. )

His wife, who is my other best friend had this made out of wood for the service. I think it is a fitting tribute. 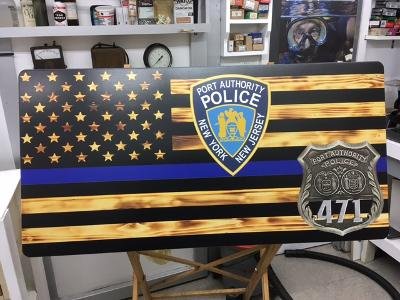 NJRC Member
Thanks, I didn't make it but it is nice.

I think I just made someones day. I went to Home Depot just now and parked my car. As I started walking to the store, a van pulled out of a parking space in front of me and was turning to leave the parking lot.

I saw something on his back bumper and realized what it was so I quickly banged on the back of the van as he was just starting to speed up.
He looked in his mirror and I motioned for him to stop. He must have thought I was a homeless man wanting to grub a cigarette or wanted to ask advice on how long to quarantine a tank bred longnose butterfly in a bare bottom 10 gallon tank without using copper.

He stopped the van and I walked up to his window holding up this thing. He had this very shocked look on his face and quickly opened the door.

I asked, Do You Want This?

It was his phone in a case and I think he was also using it as a wallet because there was a wad of bills in there with plastic cards that looked like credit cards and maybe his license. There was also a small American flag next to it. It may have been a handkerchief.

He said "OH MAN, YOU SAVED MY LIFE". THANK YOU, THANK YOU I can't thank you enough. So I waved and walked to the store.
He must have parked the truck and ran in after me. He started to hand me some money, I think it was a hundred dollar bill.

I said, "Get out of here." I am glad I saw it before you took off. He said PLEASE take this, there was $500.00 in there as well as all my documents. I waved him away and said, stay safe.

You would have to be a real dirtbag to take money for such a small jesture. I am just glad I found it and not someone who would keep it.

NJRC Member
Thank you Diana. But I am sure you would have returned it also.

NJRC Member
If it ever stops raining here I would like to change some water. I don't remember changing any since last summer and I don't want to read back through my posts to figure out when it was. I am not a big water change person and it probably almost never has to be changed but I just feel it should be done eventually.

NJRC Member
I just finished a new lamp. This is made out of a solid brass locomotive oiler from the 1850s. It incorporates a firebulb and two ultraviolet, glowing glass tubes. 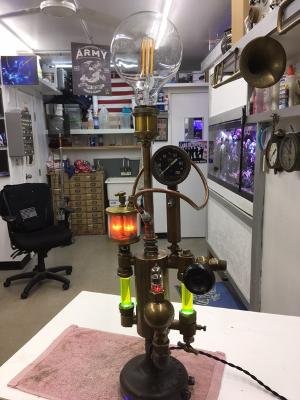