NJRC Member
From a long time ago.

Thinking outside the box

Unfortunately there is this box. It is very comfortable and warm inside the box which is why almost everyone wants to stay and think inside the box. People inside the box all have much of the same ideas and ways of thinking and oddly enough many of the same problems that don't get resolved using the same methods that people inside the box have been using since the salt water hobby started in the United States in 1971. I think it was on a Tuesday about 2 or 2:30 in the afternoon.

Even though many of the methods don't work, people still use those methods because the sides of the box are very hard so the information gets echoed all over the box and we hear the same wrong information over and over again. We can't help but to use those methods because that is whats inside that box. The box also gets a daily influx of Noobs and many times Noobs will try something and it will work. Of course they don't know that that thing has been done forty seven thousand times.

Then that information bounces around the box and everyone in the box hears it and thinks that is the way to do that particular thing. So it is done over and over again and even though it worked once, and never works again, it is still done because eventually that Noob gets out of the hobby and goes on one of those "Getting out of the Hobby, everything for sale " threads, but his Ideas keep getting re-circulated. He goes on to collect stamps and becomes an accountant at Burger King where he becomes a manager of the French Fry cooker.

Many years ago there was no box. All we had was wide open spaces, Elvis, Marylin Monroe, bell bottoms and a lot of sky. There were also no methods so we had to find our own ways to do things. We had to experiment and in doing so we killed more fish than StarKist Tuna. There was only one salt water hobbiest per state and there was no internet and we didn't know each other so everyone was a researcher. When we bought a fish, no one knew anything about that fish except the fish itself and Jacues Cousteau and he wasn't talking.

So if our tank got overcome with hair algae, we learned on our own how to deal with it. We grew enough algae to cover a 19 hole golf course, but eventually we overcame and eliminated the algae. Of course if we were inside the box we would learn that changing the water will help with that. But we, outside the box realize that never works so we didn't do that.


When our fish got parasites we quickly learned how to deal with that also. Again, if we were inside the box we would change the water , with the same result.

If a fish died, we learned through trial and error how to correct that situation. No, we didn't change the water or check our parameters. We had no test kits anyway so we had to rely on our common sense which worked out pretty well.

We also learned, on our own how to feed fish so they would never get sick. We found out that our fish were supposed to spawn all the time and if they didn't, they were not healthy and prone to diseases. We could have changed the water but knew that in the future there would be this box where everyone changed water all the time but still had numerous problems.

We never had a new fish that wouldn't eat because our tanks were natural and healthy, not sterile like a newly shampooed rug like many of the tanks inside the box.

Sometimes, after a while someone climbs outside of the box and in doing so trys to go against the fine folks inside the box. The people inside the box make fun of that person and say his (or her) Ideas can't work because it is just not done that way. If say that person uses a reverse undergravel filter, the laughter from inside the box will rise to a roar. If that person goes against biblical box knowledge and finds a way to keep fish healthy without quarantining, that roar will become a typhoon and the box will shake.

The box people will never accept those outside the box ideas because it is just not taught inside the box. Even if those outside of the box ideas are proven, they will never be taken seriously, and more importantly if any of those ideas and methods are very cheap and easy to implement, forget about it, that person may as well take up collecting old shoes because he will be driven out of the fish hobby.

Now everyone knows there are some really nice tanks inside the box. Some tanks, everyone are jealous of so going outside the box is not for everyone. But history proves that all of the new, important, earth shattering or Awe inspiring events that happened were the result of thinking outside the box because if everyone always thought inside the box there would never be any improvement because the box doesn't allow for it.

Most Neanderthals thought inside the box which is the reason they walked around for thousands of years carrying sticks and little else. It took an outside the box thinker to invent a microwave so Neanderthals could throw away that stick and heat up a TV dinner. Eventually Neanderthals got taken over by Liberals who invented that box.

Officer Emeritus
The polls suggest the Neanderthals have a chance of taking over again! Let's hope not. I like my microwave and don't want to step backwards.

NJRC Member
I actually don't know how to respond that so I will keep my mouth shut.
T

Hi paul long time no see...hope all is well with you...for some reason your pics are not showing up
T

Staff member
NJRC Member
Moderator
Two blasts from the past on this post....wow!
T

MadReefer said:
Two blasts from the past on this post....wow!
Click to expand...

Hey you (Mark right?.... sorry I was always terrible with names)...hows things with you?

The-CodFather said:
Hi paul long time no see...hope all is well with you...for some reason your pics are not showing up
Click to expand...

I don't know. Maybe a Vampire took them.

The-CodFather said:
Hey you (Mark right?.... sorry I was always terrible with names)...hows things with you?
Click to expand...

Yep, Mark. All good. You still have the lucky fishing raffle hat......LOL
T

I think I still do....hasn't seen a Raffle ticket in a long time

Officer Emeritus
Sid, a blast from the past....don't want to hijack Paul's thread. Maybe start you're own post or post in the "welcome" thread.....you're new again.
T

redfishbluefish said:
Sid, a blast from the past....don't want to hijack Paul's thread. Maybe start you're own post or post in the "welcome" thread.....you're new again.
Click to expand...

I did in the " introduce yourself" thread.I can't help if people replied or go of topic in Paul's thread oh and a hello to you too!
T

Paul B said:
I don't know. Maybe a Vampire took them.
Click to expand...

No really what happened to the pics?

The-CodFather said:
I did in the " introduce yourself" thread.I can't help if people replied or go of topic in Paul's thread oh and a hello to you too!
Click to expand...

I didn't realize there even was a topic in my thread.

The-CodFather said:
No really what happened to the pics?
Click to expand...

I don't know. I can see them. Did you pay your electric bill?
T

Paul B said:
I don't know. I can see them. Did you pay your electric bill?
Click to expand...

That reminds me...(pay the man)...I really miss your tank pics especially when you put beer cans in the tank
T

Anyone else having problems seeing paul pictures???....I don't even see the first pics you posted.... BTW....you still making them ( brain fart forgot the name of them) zappers?
T

Paul B said:
I didn't realize there even was a topic in my thread.

The-CodFather said:
Who knew :Shrug:...lol...but sorry for the "Hijack"
Click to expand...

Majano Wands? Yes but I don't make them. I gave the company away years ago and I get royalties. I still own the patent though. The thing is still selling very well. Who knew there were that many majanoes in the world. I think maybe people are using them in the ocean.
Do you see this picture? 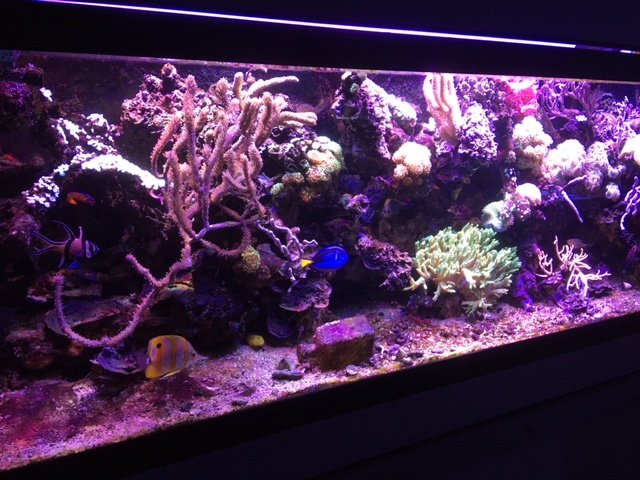