NJRC Member
I know, like I am sure many others here, when I was a kid we viewed all "germs" as bad. Our Mothers told us to wash everything and don't eat anything you dropped on the floor.
Guess what, fish eat, not only dirt, but poop. All the gut bacteria they need is in poop.

(We can't do that, or want to as our guts are a little different than a fish and hundreds of years of living "civilized" destroyed much of our ability to process certain disease organisms)

But if we quarantine fish for an extended time and only feed quarantined or dry foods, those gut bacteria will eventually be replaced by benign bacteria or disease bacteria which will out compete the good, needed bacteria, viruses and parasites that were living in harmony in that fishes gut since it was born.
That will result in a non existent immune system. Those quarantined or medicated fish will never regain their immunity very easily and will always have to eat quarantined food and will always be susceptible to infection.

A deficiency of good bacteria and/or the presence of bad and ugly bacteria, yeast (Candida,) or parasites will cause a variety of digestive problems, including abdominal pain, diarrhea, constipation, and even nutritional deficiencies. They can also cause a large number of symptoms beyond the digestive tract.

The Good Bacteria
The good bacteria include species and strains that we evolved with, like acidophilus and Bifidobacterium. These are an essential part of our digestive system and we would not survive without them. They help us to digest food by producing enzymes, manufacture some of the essential nutrients that we need to live, assist in the development of our immune system, and prevent infection by occupying and defending the space in the intestines that unwelcome organisms would thrive in, if they could.

Some species of yeast and bacteria are bad simply because they take up space, crowding out the good bacteria. This deprives your body of all the health-giving benefits that friendly bacteria provide, resulting in the poor digestion of food and the poor absorption of nutrients.

At very low populations, these bad bacteria may be considered relatively normal flora in the intestinal tract. However, being normal doesn’t make them good.


Antibiotics Can Cause Bad Bacteria Growth
While some bad bacteria and yeast may be present in very small numbers in healthy people, excessive amounts of these microorganisms can upset this delicate ecosystem and trigger all kinds of negative effects. Since the advent of antibiotics, it is quite common for people to use wide-spectrum antibiotics and unwittingly kill off many of the good bacteria that they need, allowing bad microorganisms that are resistant to the antibiotic to ‘claim more turf’ and upset the balance in this ecosystem.

I didn't make this stuff up which is why I researched it. As I said many times, I am not the God of fish. But I am old and I have been keeping fish every day for over 60 years. I made all the mistakes and used every medication known for fish and Humans. I killed more fish than Starkist Tuna and eventually I realized that by helping fish keep the fantastic immunity they were born with and not tying to kill specific organisms that main stream aquarists are taught is counter productive and the reason my fish only die of old age and in my tank, diseases are a non issue and have been for decades.
I feel this hobby is so easy but many of us try to make it so hard. Many of us can't get it that a fish is well capable to taking care of itself as long as we get out of their way and let them do what they have been doing before Betty White was born.

All we have to do is give fish a secure place to live. Secure is not a bare tank with PVC elbow from Home Depot.
Our fish will get bored reading the bar codes. If we can see the fish, they can see us and they don't like us.

They need caves, tunnels, passageways that are made of rock. Not flowerpots, statues of Buddha or door handles from a 1957 Oldsmobile Starfire.

They don't want to be seen.

They also want and need to eat something that they recognize as food that has living bacteria and viruses in. Flakes are not it no matter what the label says or how healthy the fish on the box looks.

They need living bacteria and not the stuff under your fingernails. They need the stuff that is in the guts living prey.
It's very simple. OK I'm Done.
post.
Last edited: Oct 10, 2020

NJRC Member
It is very hard to do this as it is to long and it won't let me do it.

NJRC Member
I agree so much with how you feel about tank care
Some good lights some ocean water and food,,, after that let Mother Nature do her thing,, I break all rules (not on purpose) and have decent outcome Don’t make fun of my plastic chain my ponies like it

NJRC Member
It's about time these two just found each other. It shouldn't be long now. 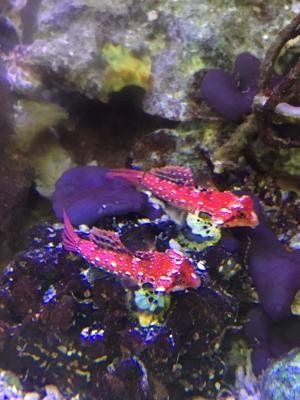 Paul B said:
It's about time these two just found each other. It shouldn't be long now.

NJRC Member
Paulie, this fish tank stuff is so easy and so many of us make it so hard.

NJRC Member
Worst thing for my tank is ME

NJRC Member
You guys have forgotten more than I’ll ever know. I’m envious

NJRC Member
Jamie, I have even forgotten what I remembered to forget.

I am making some dynamite Manhattan Clam chowder, (My favorite) so I figure I would post a picture of one of the clams that I use. These are the same clams I feed my fish, but I am not going to save any of them for the fish today. They can eat cake. 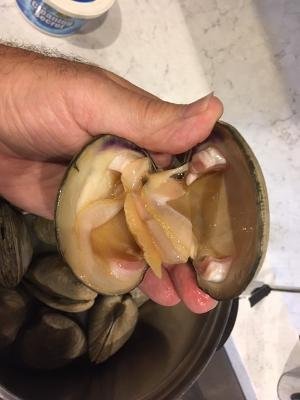 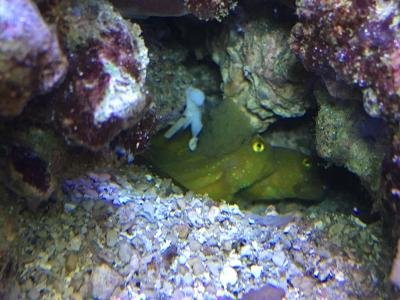 Paul B said:
Jamie, I have even forgotten what I remembered to forget.

I am making some dynamite Manhattan Clam chowder, (My favorite) so I figure I would post a picture of one of the clams that I use. These are the same clams I feed my fish, but I am not going to save any of them for the fish today. They can eat
Click to expand...

Clams don’t look like they were caught today,, lol, but then again I’m a seafood snob

NJRC Member
I steamed them open for clam chowder, thats why they don't look fresh. I got them fully alive. Some of them were doing the macarana in the bag.

Paul B said:
I steamed them open for clam chowder, thats why they don't look fresh. I got them fully alive. Some of them were doing the macarana in the bag.
Click to expand...

Always good to eat a little clam now and then

NJRC Member
I made about a gallon of Manhattan Chowder for us and some neighbors and friends tonight.

Paul B said:
I made about a gallon of Manhattan Chowder for us and some neighbors and friends tonight.
Click to expand...

Enjoy your soup, always better home made instead of in a can

NJRC Member
Whats a can?
I also make stuffed calamari.

NJRC Member
These "guys" should be spawning any day now. I had one for a few years and just added another one a couple of weeks ago. Now one of them looks like this, smiles a lot and has really long eyelasyhes. 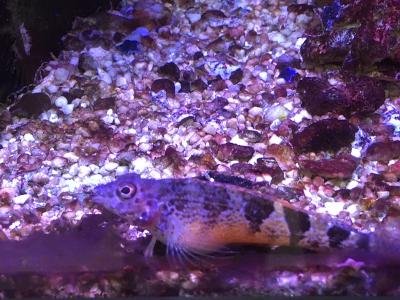 NJRC Member
This hobby was much more fun in the early days because there was no internet so we actually had to use our brains for something more than texting which is the stupidest thing I can think of. My phone makes all sorts of sounds all day so I assume I am getting texts, E Mails, calls, messages or it is just my bones creaking.

Last week my phone buzzed, beeped or whistled and my wife picked it up and told me, "you know, you have a voice mail on here from Christmas. I said, Which Christmas?" If you want to talk to me, dial the phone, or tell it to call me, how ever you make a call then use your mouth to make sounds that I will understand. If you have a lip ring or tongue piercing, don't bother because I won't understand you.

Anyway of course we had LFSs but in 1971, in New York anyway only one of them had salt water fish. When other stores eventually acquired salt water fish they hung an 8'X8' vinyl sign in the window that said, "We Have Salt Water Fish". That invariably meant they had a five gallon tank with two or three blue devils and a domino in the process of receiving last rites.

It took quite a few years before salt water was available in most stores.
Much of my livestock came from a muddy inlet on the Long Island Sound. I would collect horseshoe crabs, blowfish, sand worms, eels, flounders, crabs, shrimp, seaweed and anything that moved. I never worried about ich, velvet, pop eye, or any social diseases. When those creatures grew to big, I brought them back to the beach and let them go and collected more. Now they shoot you if you release creatures back into the wild. It is not like I was releasing Emu's, aardvarks or Duck Billed Platypuses, these were the things I just collected and brought a few miles away for a sort of vacation, then brought them back. Does that make me bad? So far nothing happened.

That muddy tank is still running minus the platypuses. I had very few problems and I still don't today.
Eventually we got different systems. First of course we had undergravel filters, which Me and Lady GaGa still use. Then we got wet dries, Jaubert, Berlin systems, plenums, live sand, dead sand, live rock, dead rock, acid rock, rock and roll, Elvis, Elton John, Roy Orbison and the Beatles. I tried all those systems but I tried them with my undergravel filter which I will never part with. All those systems came and went but my undergravel stayed.
Now we have "Experts", Guru's, Noobs and Geezers and have more problems than we had in 1971.